I was 5 years old when I competed in my first race. I loved the competition, the rush and the joy I got from pushing my body all out. At age 15 I started competing as a cyclist. Quickly, I thrived as a junior cyclist becoming the Canadian National and North American Mountain Biking Champion. I turned “pro” in cycling at the age of 18; the youngest female on the international professional mountain biking circuit, the World Cup. At age 20, I was ranked 14th in the World, at the top of my game, the 2000 Olympics in sight.

In June 2000, in the mountains of Spain, during an Olympic qualifying events my life completely changed. I was in the best shape of my life when I had a fluke crash during training 2 days before the qualifying event. I got a concussion, most likely the 3rd of my career, blacked out for a few seconds after hitting my head directly on a rock, and regained consciousness only to find Spaniards asking questions I did not understand. Like the competitor I was, I got back on my bike, rode to the team van, rested the next two days, then competed in the qualifying race with a headache, fatigue and a hematoma that covered almost half my right thigh. Needless to say, the race did not go well, it went beyond poorly. I began a downward health spiral that seemed unstoppable. I could no longer tolerate intensity in my training, suffered from extreme fatigue at times, yet had insomnia, and suffered frequent illnesses. No one, not even the national team doctors, could figure out what was wrong. My labs were normal. 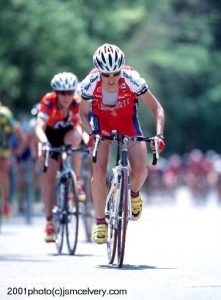 On paper, I was “healthy.” In December 2001, I suffered from a bilateral all lobes pneumonia. In January 2002, I retired from professional cycling, broken, mind, body and spirit. After retirement I moved to the Blue Ridge Mountains in Virginia. After A LOT of rest and recuperation I got back to about 75% of my performance. I kept cycling, no longer competing internationally, but having fun participating in local events. I still had lingering fatigue and could not get my fitness back to peak performance. In 2007, I had another “crash,” but not on a bike this time. After 6 months of sleep deprivation following the birth of my son, I became chronically fatigued, had trouble sleeping, experienced brain fog, exercise intolerance and, again, frequent illnesses, catching any little virus that came near me. Once more, no one could figure out what was wrong with me and blamed being a busy mom and possibly depressed. I was EXHAUSTED not depressed!

Finally, I took matters into my own. I decided to go to Naturopathic medical school, determined to figure out my own health issue first. In my 2nd year at Bastyr University, while surrounded by medical textbooks in our library, I finally figured out that I had chronically reactivated Epstein Bar (EBV), the main virus that causes mono, adrenal insufficiency and B vitamin deficiencies! The answer WAS RIGHT THERE, in my labs. Now that I could actually read and interpret lab reports, I saw it.

I was not crazy; I was sick, actually sick, NOT depressed.

I quickly realized that in addition, I also had Lyme disease and mold illness. No one had ever tested me for either. Immediately, I was committed to healing not only myself but spreading the word to others about what I was learning, about ways to support healing and reaching optimal health again. For me, it wasn’t simply about healing; it was also about finding thriving health.

I moved out of a moldy house, changed my diet, added supplements, did IV therapy and began to heal myself physically.

I took a long route to coming to my approach in medicine. Being injured and sick was the hardest experience of my life, AND it also brought me to my current path. It took understanding the challenges of peak performance and post-concussion syndrome, living though Lyme disease, chronic EBV and persistent fatigue, studying Naturopathic medicine (the foundation of Functional Medicine), and getting my nurse practitioner degree, and attending many health conferences to forge an approach that truly aims at healing and supporting optimal health.

The Win that Keeps on Giving

I am now thriving and want my patients to thrive as well.

My approach at Be Vital Health Center is grounded in Naturopathic, nursing and Functional Medicine principles thus is preventive, patient-centered, promotes the body’s ability for healing by using traditional and natural therapies. My approach goes beyond relieving symptoms and attempts to facilitate the body’s innate healing processes. I consider that individuals are just that, individuals, and therefore unique in who they are and in what may have contributed to their health condition and unique in how their health can be optimized.

I founded Be Vital Health Center so I could execute my vision of helping people heal and support my patients reaching optimal health and performance in an environment that is actually conducive to health. My goal is to help my patient reach optimal thriving health – mind, body and spirit. 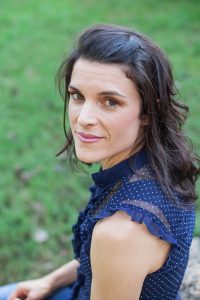 Melanie Dorion is an Integrative and Functional Nurse Practitioner, founder and Medical Director at Be Vital Health Center and founder of Pentad Integrative Health. She focuses on managing and reversing chronic illnesses, disease prevention and health optimization. Her approach is grounded in nursing, Functional and Naturopathic medicine philosophies. She studied Naturopathic Medicine at Bastyr University in Washington before doing her Nurse Practitioner degree at Seattle University. She has received advanced training in obesity management, nutrition, exercise science, herbal medicine and genetics allowing for a unique approach to health concerns.

Melanie’s work centers on environmentally acquired illnesses including Lyme disease and co-infections and mold illness and performance optimization. As a former professional cyclist and mountain biking Canadian National champion, Melanie understands peak performance and the importance of having mind, body and spirit working optimally. Melanie is also a chronic disease survivor, having reversed chronic fatigue and Lyme disease. Now a business owner, mother, wife and locally competing athlete, optimal performance is important in all areas of her life. Melanie combines her understanding of optimal performance and medical knowledge to support patients wanting to feel and perform their best, whatever their role – from being a parent, an athlete, executive or a musician.

Melanie is also passionate about educating the next generation of healthcare providers and teaches through her online educational platform, Pentad Integrative Health,and enjoys public speaking. Her speaking engagements include Genova Diagnostics, A4M, Biohealth Congress FIM and is a regular speaker at Mary Baldwin University in addition to leading health workshops and Functional Forum meetings in Virginia.

She is a member of the Institute for Functional Medicine, American Academy of Environmental Medicine, Obesity Medicine Association and the Virginia Council of Nurse Practitioners. Melanie also enjoys spending time with her family, hiking, cycling and trail running – anything fun on trails.

Melanie is a passionate speaker on topics of health and well-being.

Her educational talks provide valuable health information with practical and readily available solutions to support optimal health. If you’d like to inquire about having her speak at your next health fair, employee wellness day or community event click here.

We’d love to stay in touch!

You have Successfully Subscribed!